The goal of any dairy calf raiser is to have a healthy, productive, replacement heifer that is a profitable addition to their milking line. The Crystal Creek® Swift Start® Calf & Heifer program consists of a line of milk replacers, texturized calf feeds, calf pellets and mineral formulated with industry-leading technology and manufactured with the highest quality ingredients available. University research has proven time and time again that the way calves are fed and raised during the pre-wean period will affect their performance later in life. In the “Swift Start® Calf Feeding Challenge” newsletter article published in April of 2017, Crystal Creek® provided documentation of superior performance results in pre-weaned calves that were on the Swift Start® Calf & Heifer program. This data showed higher body weight gains, improved feed conversion rates, improved nutrient digestibility, less veterinary intervention and smoother transitions into weaning. The calves on the Swift Start® calf feeding program not only outperformed the calves on the competitor’s program but also saved the calf raiser money. This article will take topics highlighted in the initial trial a step further and evaluate the performance of heifer calves as they transition into post-weaned heifers and ultimately, progress into the lactating herd. 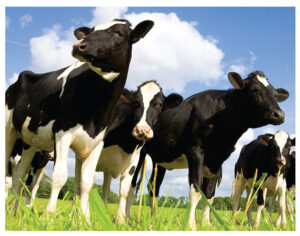 An on-farm calf trial was conducted during the winter of 2017-2018; comparing the Crystal Creek® Swift Start® Calf & Heifer program to a competitor’s feed program. The trial was performed on a 400-cow conventional dairy, located in eastern Wisconsin. The calf raiser and their employees collected all the information, compiled it into a spreadsheet and then submitted the data to Crystal Creek®. Both groups of calves were weighed at birth and weaning. Milk replacer powder was weighed with a scale prior to mixing. Calf feed fed was weighed and refusals of the calf feed were also weighed to verify amounts of calf feed consumed. Treatments, and their associated costs, were recorded. 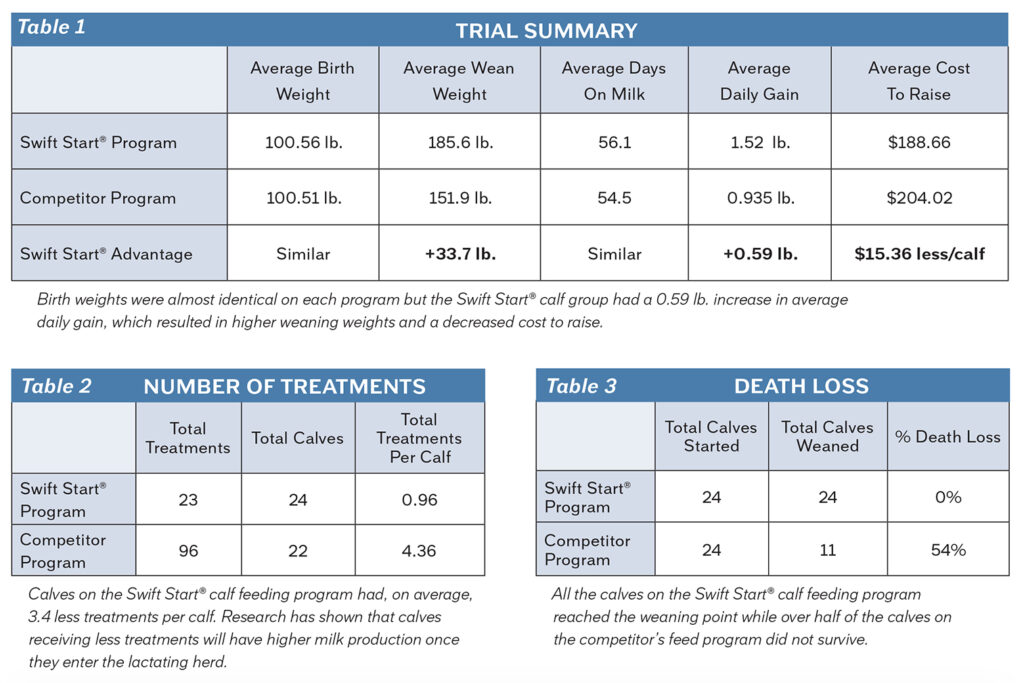 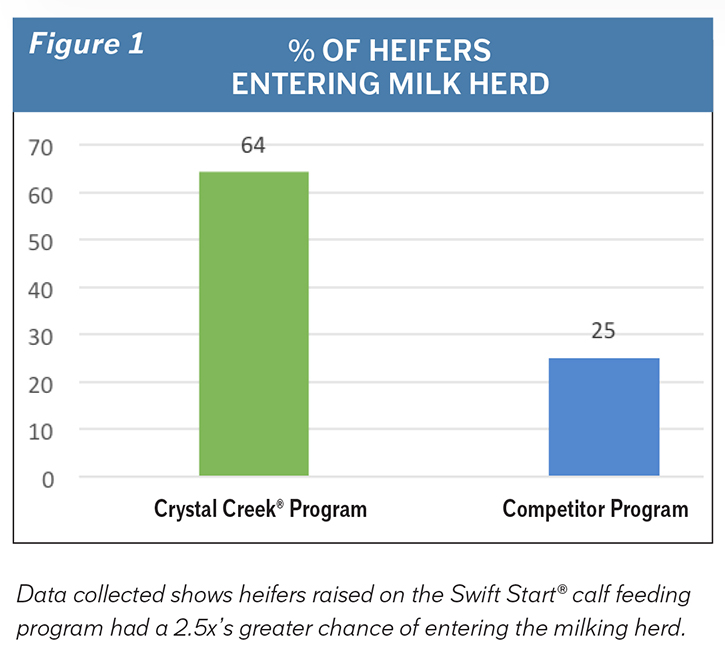 Calves on the Swift Start® calf feeding program had more uniform body weights and a much smoother transition into weaning. Many of the heifers that were fed the competitor’s milk replacer and feed during the pre-wean period, did not survive to the time of breeding due to health issues. Animals in both groups were fed the same feed post-weaning. Heifers on the Swift Start® calf feeding program had significantly higher reproduction rates resulting in heifers reaching the milking herd sooner, meaning less time on feed and more milk profit.

The animals in the Swift Start® group had a higher percentage of cows entering the milking herd, who experienced earlier calving, (between 22-25 months of age), produced an increased amount of milk, possessed better reproduction rates and demonstrated fewer cull rates vs. cows from the competitor feed program. 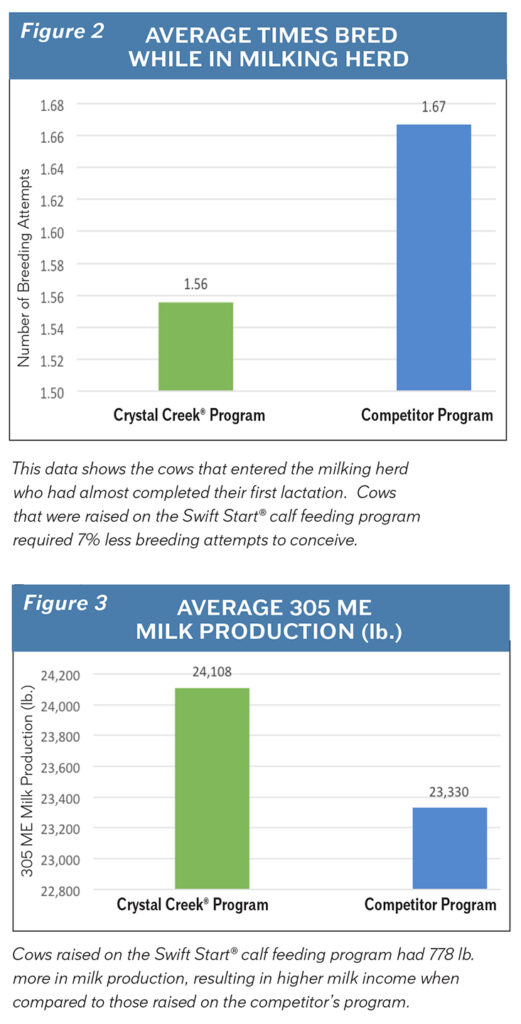 Figures 4 & 5 show the economical differences between the two programs and the associated pounds of milk and milk revenue. The Swift Start® calf feeding program saved the producer $15.36 per calf on the cost of rearing during the pre-weaned phase. Those same calves went on to produce 778 more pounds of milk (on average) during their first lactation when compared to the calves fed the competitor’s pre-weaned feed program.

The data collected with this trial consistently shows the Swift Start® calf feeding program continues to outperform others while delivering an increase in total profit to the producer. Call Crystal Creek® today to improve your herd profitability by feeding your calves with the Crystal Creek® Swift Start® Calf & Heifer Program. We are confident you will be glad you called. 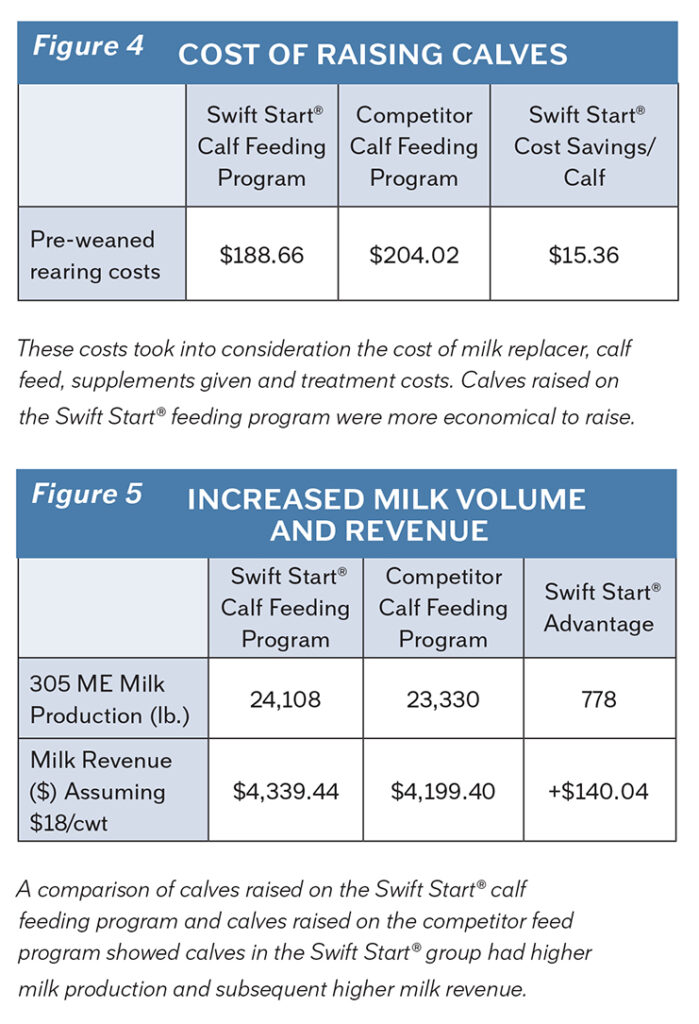