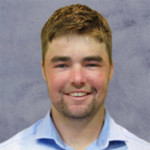 When looking for the next pound of milk, most time is spent evaluating what could be changed in the ration. This often leads to discussions based on individual feedstuffs and ingredients. Dairy cow performance starts with a properly balanced diet, but sometimes the biggest opportunities are unrelated to the nutrient values in the feed. The environment in which a cow spends most of its day, how its feed is delivered, and the management of the cow’s time, all play a role in performance. 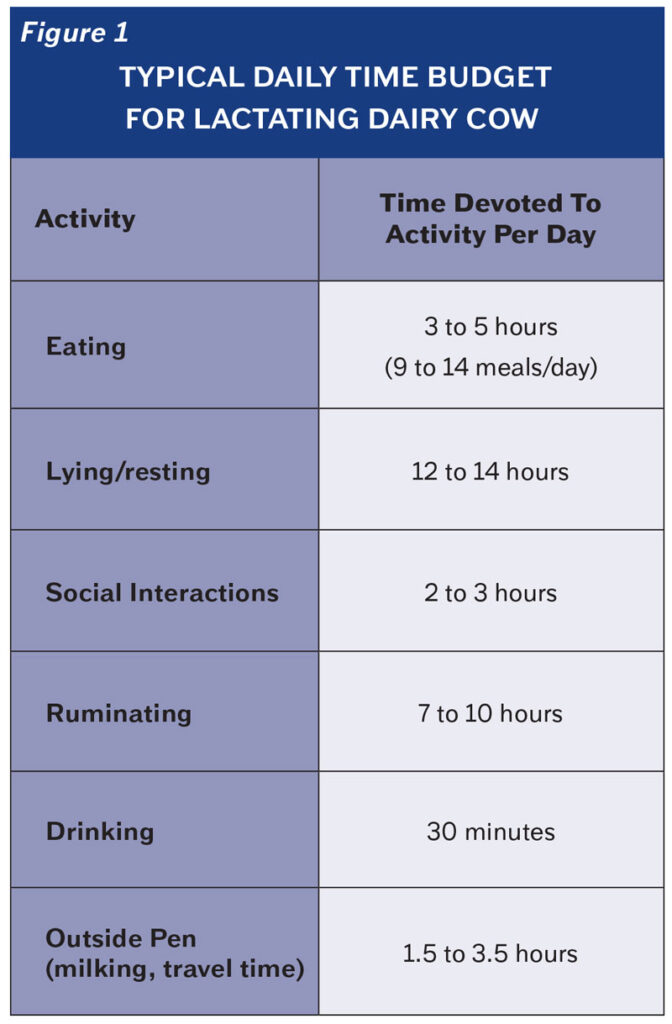 Stocking Density of Stalls: Stocking density measures how many animals are in a pen, or a barn, compared to how many stalls there are in a percentage format. For example, a pen that has 200 cows in it but has only 160 stalls, has a stocking density of 125%. While it is an economic advantage to make the most of the capital building investment and maximize the number of animals per barn, many times as stocking density increases, productivity per cow can decrease. Cows need to rest. The most productive cows rest more, averaging close to 14 hours of resting time per day compared to 10-12 hours in their less productive counterparts. The need to rest is very strong in dairy cattle, a need that will be prioritized over eating time if need be. In one study, cows that were forced to stand for an additional 1.5 hours per day, decreased feeding time by an average of 45 minutes per day. With more cows than stalls, the animals need to essentially take turns lying down to rest and ruminate. This makes it difficult to obtain a normal rest time requirement of 12 hours or more. Studies show that at 120% stocking density or greater, resting time is reduced by 12-27%. At a 130% stocking density, rumination may be reduced by as much as 25%. These reductions in lying time and rumination ultimately reduce dry matter intake (DMI) and cow performance.

Milking Time: While space and stall numbers have a large impact on resting time, the amount of time cows spend away from their stalls also plays a critical role in performance. With cows needing 12 to 14 hours of rest per day, with approximately 5 hours spent eating and additional time spent drinking water and performing social interactions, the total time allotted for milking becomes critically important. Milking time is generally described as “gate open to gate closed.” A cow does not have to be physically standing in the parlor being milked to be counted in milking time. As soon as she is taken away from the environment where she is able to rest and needs to be walking, standing in a holding area, or getting milked, she is not able to rest. Measuring parlor efficiencies and knowing milking time per group can shed light on resting time issues.

Feed Bunk Space and Management:  Increasing dry matter intake, especially in high-producing cows, is the key to profitability. Cows need to eat to perform. While there is no way to physically force a cow to eat more, it is possible to eliminate roadblocks that may keep cows from reaching their full intake potential. The amount of feed a cow eats in a day is directly related to the frequency of meals in a day and the amount of feed consumed per meal. To increase total dry matter intake, cows need to either eat more frequently, consume more feed per meal, or both. One of the most common issues surrounding this topic is bunk space. Crystal Creek® recommends 24” of bunk space for lactating cows in the general herd and 30” of bunk space per cow for transition cows (3 weeks pre-calving to 3 weeks post-calving). Providing adequate bunk space allows cows to eat with their herd mates. To some producers, this may sound ridiculous, as one would believe cows should be able to take turns to eat. Dr. Leiterman uses the following analogy to describe the cow’s behavior: Think about when you have eaten with a large group, usually interacting socially at the same time as you are eating like during family gatherings, holidays, or meals at restaurants with friends. You are likely to eat more at these meals than you would when you sit down for a quick lunch by yourself. In large part, this is due to the social aspect of the meal. Cows are not different. Cows are herd animals, meaning they are social and do things in groups. Without enough space at the bunk, cows are not able to eat in groups causing a decrease in feeding frequency and amounts consumed per feeding.

Allowing adequate bunk space also decreases the ability for boss cows to inhibit others from maximizing their dry matter intake. Boss cows will dominate a section of the bunk, often taking the space of two or three other cows and don’t allow others to eat in that area. When overstocked on bunk space, this issue becomes multiplied as cows are already short on space to eat. Headlocks are a great way to minimize this issue, making it harder for one cow to encroach on the space of others while feeding.

Feed bunk management also plays a critical role in maximizing dry matter intake and maintaining rumen health. Trying to maximize dry matter intake requires feed to be available to cows when they need to eat. Cows that consistently run out of feed adapt by eating larger, less frequent meals because they learn if they don’t eat now, the feed may not be there later. This increase in meal amount, but decrease in frequency, increases the amount of fermentable carbohydrate in the rumen after each feeding. This essentially creates a slug feeding situation, where rumen pH drops, potentially below 5.6, creating a state of Sub-Acute Rumen Acidosis (SARA). This drop in rumen pH increases the risk of butterfat depression and decreases fiber digestion and microbial protein production. 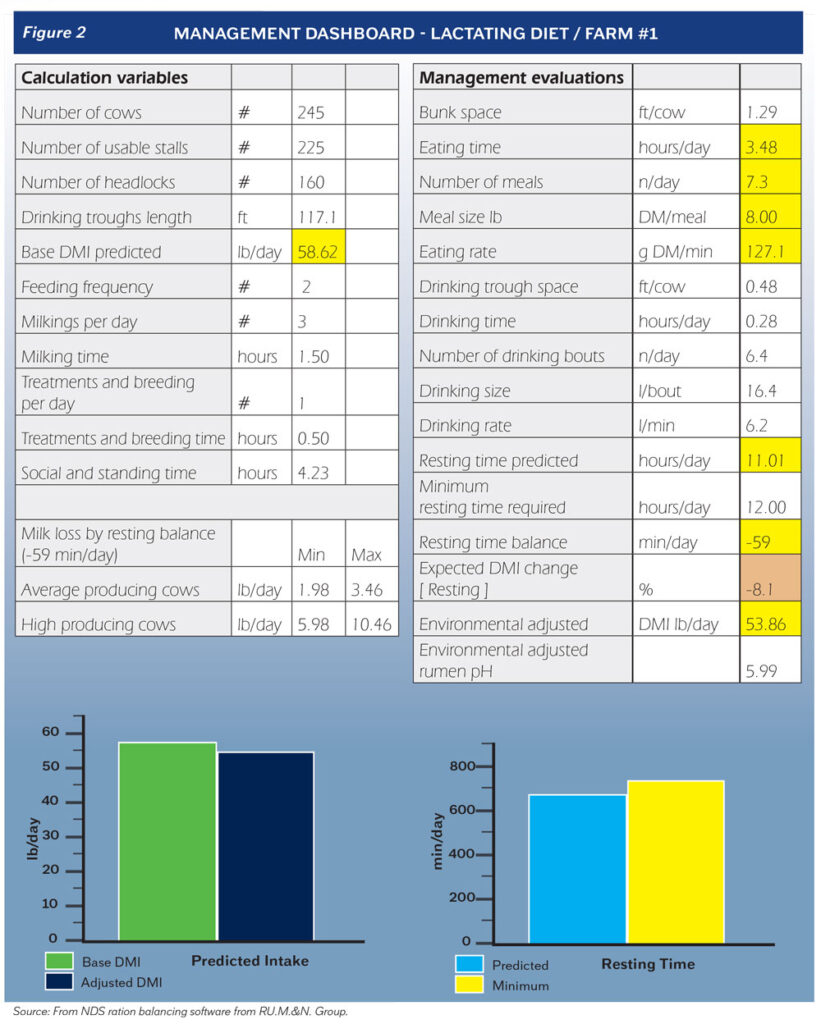 Overall Resting Time: Stocking density of stalls, milking time, and feed bunk space all play a role in the overall resting time of the cow, along with other management specifications. Crystal Creek® uses the NDS ration balancing software by the RU.M.&N. Group. This powerful nutrition and management software helps Crystal Creek® monitor and assess nutritional and management decisions on-farm. Figure 2 outlines a common situation, with a 3-stall, free-stall barn moderately overstocked for bunk space (Stocking Density 109%), creating a significant bunk space issue, overstocking the feed bunk by 153%. When adding in milking and treatment time, these cows will struggle to reach the maximum potential of the diet. Dry matter intake is predicted to be limited due to resting time, in turn reducing milk production. In this scenario, the highest producing cows in the group may be losing 6 to 10.5 pounds of milk production while lower producing cows may be losing 2 to 3.5 pounds.  This tool helps evaluate daily interactions and movement of cows in a group or herd and can help pinpoint bottlenecks on dairies that can affect profitability and cow performance.

Crystal Creek® takes a total operation approach to dairy nutrition and management consulting, looking at all the factors that affect profitability on a dairy including how, and where, cows spend their day. The nutrient composition of the ration is always important, but it is imperative to remember all the factors that play a role in making sure cows reach their full potential and achieve a profitable level of production. Contact a Crystal Creek® nutritionist to explore hidden opportunities to increase the profitability of your dairy operation.