Water Hygiene: How often Do You Think About It?

Click here to view as a pdf:  Water Hygiene How Often Do You Think About It 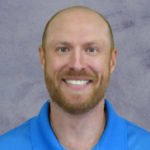 Water is the most critical nutrient for all animals, but how often do people think about it? Would you drink out of your animal’s water trough? Research shows that poor water quality dramatically reduces water consumption, which in turn lowers production and deteriorates overall animal health. A common cause of poor water quality is biofilm formation. Preventing biofilm formation and improving water quality can be done at a low cost while providing a high return on investment for farms.

What is a Biofilm?

A biofilm is a slimy, glue-like substance that can be found almost anywhere in a farm’s water system.

Any environment containing moisture and nutrients can produce biofilms. Common biofilm locations include inside of pipes, holding tanks, plate coolers and water troughs. A biofilm can consist of a mixture of many species of bacteria, as well as fungi, algae, yeast, protozoa, debris, and corrosive agents. 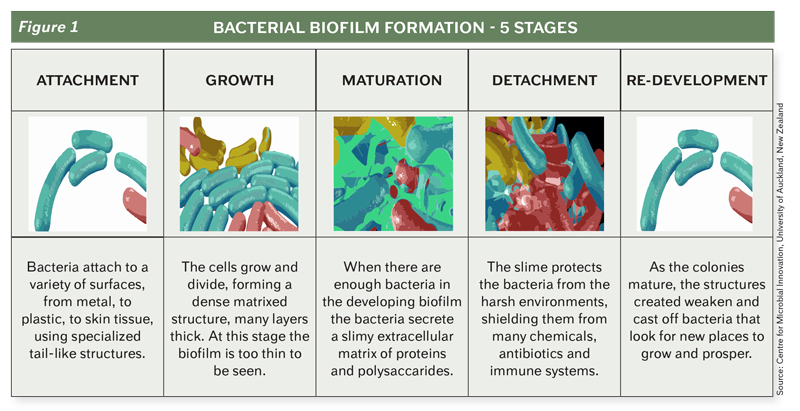 Certain species of bacteria thrive in high iron and/or manganese environments. This makes water that is high in iron and/or manganese particularly problematic because iron and manganese-loving bacteria often grow rapidly within the water system itself, resulting in a black, foul smelling slime. Biofilms can cause problems within the water distribution system by clogging lines, plugging valves and constantly seeding the water with potential disease-causing organisms as water flows through the system. Figure 1 shows how biofilms are formed and spread over time. It is estimated that over 99% of disease-causing organisms are found within a biofilm.

The use of chlorine dioxide in water systems is one of the safest and effective methods of destroying biofilms. AquaSoar™ is a concentrated, two-component, activator/base technology that produces chlorine dioxide on-site. The chlorine dioxide can then be injected into a farm’s water delivery system at a low, yet effective, concentration to remove biofilms and pathogens from the water source prior to delivery to livestock. Chlorine dioxide has been proven to be more effective than hydrogen peroxide when it comes to biofilm control. The USDA has deemed chlorine dioxide to be safe when added to livestock drinking water at an amount up to 4 ppm. 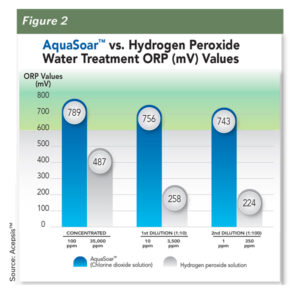 Figure 2 demonstrates the ORP (Oxidation Reduction Potential) values of each chemical technology/formulation when added to water. Hydrogen peroxide breaks apart (hydrolyzes) immediately when added to water, significantly reducing its disinfection value. AquaSoar™ retains its high ORP values even when diluted to low concentration levels. Chlorine dioxide’s ability to remove biofilms at low concentrations is one of its greatest strengths.

Why Is Chlorine Dioxide a Better Choice for Water Treatment Than Hydrogen Peroxide?

How Does the AquaSoar™ Chlorine Dioxide Injection System Work?

AquaSoar™ has specially formulated activator and base precursors which produce chlorine dioxide at the highest possible yield, in the shortest amount of time.  The AquaSoar™ Activation System is then used to inject the chlorine dioxide directly into the waterline. 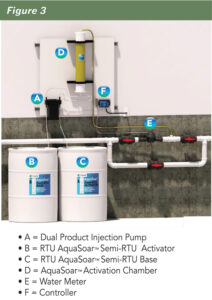 Figure 3 shows the AquaSoar™ water treatment injection system. The injection system set-up is simple. A diaphragm pump (A) injects the semi-RTU activator (B) and semi-RTU base (C) into the activation chamber (D) where highly concentrated chlorine dioxide is produced. A water meter (E) senses the water volume flowing through the line and sends a signal to the controller (F) which doses the chlorine dioxide from the activation chamber directly into the water line to provide the desired ppm concentration.

Water is the most important nutrient on the farm but it is often forgotten. Using the AquaSoar™ water treatment system gives producers an opportunity to improve the most critical nutrient in their animal’s diet through both biofilm and pathogen load reduction. Ask yourself, would you drink out of your animal’s water system? If the answer is no, your farm should consider AquaSoar™ for improved water hygiene.