Click here to view as a pdf:  A Poultry Success Story

Crystal Creek® has many customer success stories, one of which belongs to an organic family farm in upstate New York. This producer started on the Crystal Creek® Poultry Program approximately three years ago and currently has 9,913 brown layers. The birds were brought in as pullets at 18 weeks of age and are housed in an unheated, open barn with 15ft peaked roofs and curtain side walls. They are allowed access to the outdoor pasture at least one day every two weeks in the winter months, as is required for his free-range market. Feeding occurs once per day, by hand, and barn walkthroughs are performed about 10 times throughout the day to monitor floor eggs and bird health. Birds are weighed weekly and feed intakes are closely monitored. There are electric lights that are used to supplement the natural daylight to give the birds at least 16 hours of light.

The two main objectives this particular farmer had when he switched to the Crystal Creek® Poultry Program were to increase his egg production and therefore increase his net profit. His first flock of pullets were not properly debeaked and were too heavy, which lead to a challenging and slow start, but the birds eventually bounced back and did surprisingly well. When his second batch of pullets arrived healthy, they were immediately started on the Crystal Creek® Poultry Program. The birds are being fed on a phase feeding protocol, which customizes the protein, calcium and energy inputs to the birds’ stage of production. As the birds move from one phase to another, the diet caters to their ever-changing nutritional needs. This approach not only maximizes production throughout the laying cycle, but often results in lower feed costs and a higher return on investment.

The Crystal Creek® Poultry Program is customized to each flock based on ingredient availability, production type (i.e. organic vs. conventional) and breed of chicken. For this flock, the nutrition program was designed using organic ingredients within a soybean meal and corn-based diet. A standard addition to any Crystal Creek® custom poultry diet is Poultry Pro® Mineral, which contains highly bioavailable minerals, increasing the nutritional value of the diet overall. This producer also supplements with Crystal Pellets™ to support consistent feed intake. With this supplement he also sees improved overall bird health and production and therefore feels that the combination of high-performance nutrition and the additional support of Crystal Pellets™ reduces his flock’s risk of disease and allows him to remain an organic and antibiotic free production system.

Hyline® brown layers, which is this producer’s breed of choice, have certain production standards and targets. According to the published breed production chart, 20-week-old birds should be producing at a rate of 32-49%. During the peak phase of lay, which is generally between 28 and 30 weeks of age, the target rate of lay is 95-96%. Once on the Crystal Creek® Poultry Program, this flock’s production rates skyrocketed, starting at 90% lay at only 20 weeks of age. Production continued to improve, with a peak production rate of 98.9% and a current production rate of 96.8% at 38 weeks of age. Figure 1 compares the production curve of the flock on the Crystal Creek® Poultry program to the breed standards, highlighting the fact that not only did the flock start peaking sooner, but they have been able to maintain higher production rates than breed standards. 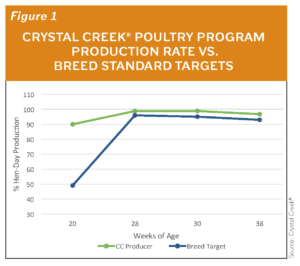 Egg producers get top dollar from their buyers for large and extra-large eggs, as these are the sizes in highest consumer demand. Jumbo, medium and small sized eggs face a price penalty, making them less desirable to produce. According to the USDA Egg Market New Report1, the price per dozen for organic, brown, free-range eggs ranges from $1.65-$1.75 for large, while mediums and smalls only receive $0.54-$0.94 per dozen eggs. That is over a dollar in additional income per dozen eggs simply based on egg size. This producer’s flock produced an average of 98.2% large eggs over the course of the laying period, giving this farmer a profitable market for his eggs.

The organic, free-range markets that this farmer targets value richer, deeper egg yolk color, which is often based on the DSM YolkFan™. Consumers prefer to have a deeper yolk color, as this is often an indication of appropriate bird health and nutrition. The wholesale buyer values a deeper colored yolk as a possible indication of the birds having access to pasture. A deeper colored egg yolk can mean the potential for a higher retail price. This individual has seen an average of a 9 or 10 on his egg yolks on the DSM YolkFan™. As shown, a 9 or 10 on the scale is a deep yellow, light orange. 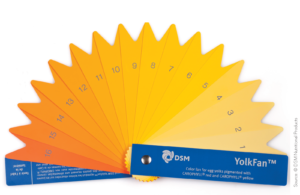 Average mortality rates for these brown layers range from 1.5-3.5% for the year, but this flock is maintaining a 1% or below death loss. This is due in part to the addition of Crystal Pellets™ to the diet, which the producer supplements every day of the year. The addition of Crystal Pellets™ can improve digestion and overall intestinal health, which in turn leads to improved overall health as the intestine is the largest immune organ in the body. The active ingredients in Crystal Pellets™ have been shown to stimulate and enhance both innate and adaptive immune responses2. After hearing of his successes, neighboring poultry producers have begun supplementing Crystal Creek’s Whole Leaf Aloe Vera Juice through inline medicators into their water supply and have reported a consistent 2% increase in production.

Looking To The Future

This Crystal Creek® producer is also planning on reopening a mill in his community to better serve his neighbors locally. He credits his ability to reopen the community feed mill to the support he has gotten from Crystal Creek® and the improved net profit he has seen since beginning the Crystal Creek® Poultry Program.

Contact a Crystal Creek® poultry nutritionist to learn more about optimizing your flock’s performance and the positive impact it could have on your net profit.