Click here to view as a pdf:  Managing Mycotoxins In Feedstuffs 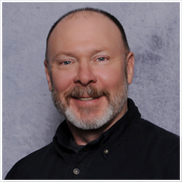 Mycotoxins are highly poisonous compounds produced by molds that can grow on livestock feeds both in the field and in storage.  Mycotoxins can seriously reduce production in livestock and can negatively affect the health of both livestock and humans alike. Stressful growing and harvesting conditions, such as drought or very wet weather, are conducive to higher mold growth resulting in more mycotoxins in the feed. Mycotoxins are common in livestock feedstuffs and it has been estimated that over one third of the global grain supply has mycotoxin contamination. Poor storage conditions, post-storage mishandling of feedstuffs and poor bunk management may encourage further mold growth once the crop is out of the field.

Effects Of Mycotoxins On Livestock

Mycotoxins can have significant negative effects on the health, productivity and profitability of livestock. There are several points to consider when dealing with mycotoxins.

Monitoring For Symptoms Of Mycotoxin Exposure In A Dairy Herd

Through my years of working as a livestock nutritionist, I have learned that there are some situations that would indicate the need for an immediate investigation into the possibility of a mycotoxin exposure. For example:

1)  Milk Production Drop:  A significant drop in production (3 to 20 lbs./hd/day) in a relatively short time (1 to 14 days).  This drop may happen in conjunction with feeding a new forage or grain.  However, there can be pockets of mold growth/mycotoxins within a bunker, pile or silo which can unexpectedly cause a major drop in production without a change in feedstuffs.

3)  Abnormal Dry Matter Intakes: Some mycotoxins are well known for reducing dry matter intake (DMI) in dairy cows. For instance, vomitoxin can significantly reduce DMI in lactating and dry cows. However, I have also experienced situations where mycotoxins caused dry cows to have abnormally high DMI as well. For example, Holstein far-off dry cows normally have a daily DMI of approximately 30 lbs. In one of these incidences, the dry cows DMI increased to 40 lbs. or more. When a good mycotoxin binder was added to the dry cow ration the DMI promptly went back to normal levels.

Is There Merit In Testing Feedstuffs For Mycotoxins?

As the awareness of mycotoxins in livestock feeds increases, the willingness to test feedstuffs for mycotoxins is also increasing. Testing individual feedstuffs, or the overall TMR can be a helpful tool in determining mycotoxin exposure to livestock. However, it is important to be aware there are some significant limitations to the amount and value of information provided by many of the current mycotoxin testing labs that prevent them from being the absolute determination of a mycotoxin problem in the feeds. Consequently, a lab analysis for mycotoxins should only be one part of an overall checklist to determine the degree of mycotoxin exposure to the livestock and the need for a plan of action. Here are some points to consider when assessing the value of a lab analysis for planning a strategy to address a suspected mycotoxin issue.

What this means is that it is possible to have a lab analysis report for five mycotoxins, that found a detectable level of two mycotoxins, both below tolerance level and still have the cows demonstrate serious health and production problems due to mycotoxin exposure.  It is also possible to have a lab analysis report that no mycotoxins were detected and there can still be a significant challenge to the animals from mycotoxins that were not detected or not analyzed for. That is why it is important to consider the lab analysis for mycotoxins in context with other herd production and health observations when determining a mycotoxin risk assessment and action plan. 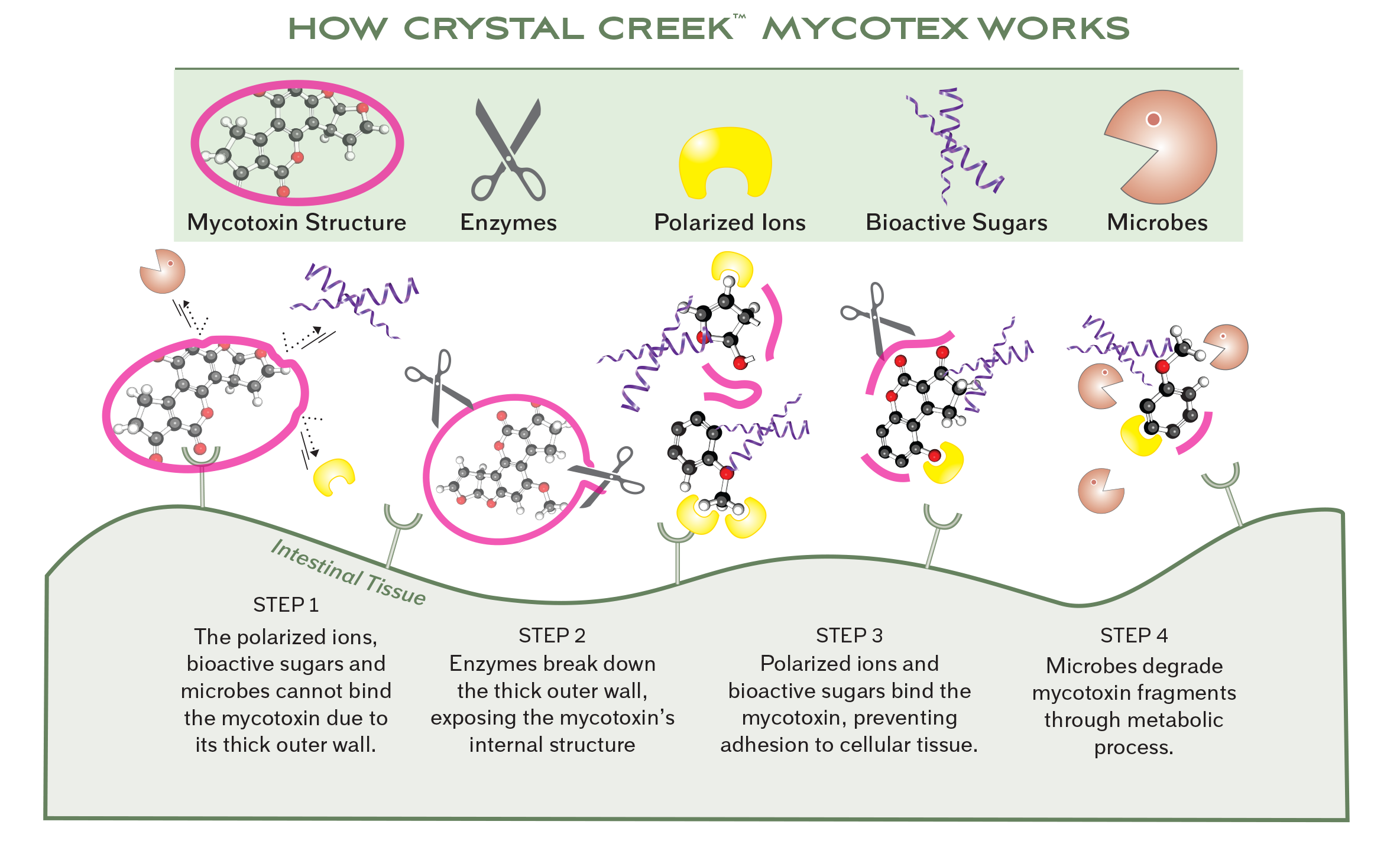 What Is A Good Mycotoxin Binder Strategy?

Develop a mycotoxin assessment checklist for your herd incorporating the points outlined in this article. Assess the risk factor of new feedstuffs to be fed based on cropping and storage conditions. For example, if the corn silage dry matter is high (45% or higher) then the risk of poor fermentation is also high and conditions for mold growth mycotoxins are likely. If the affected feedstuff cannot be reduced or eliminated from the ration, then an effective mycotoxin binder should be fed.

Crystal Creek® Fuse 207™: Fuse 207 has both yeast cell wall glucans and polarized clays that have been shown to provide effective mycotoxin binding for a wide range of mycotoxins that are prevalent in the livestock industry such as aflatoxin, zearalenone, fumonisin, T2 and ochratoxin.

Dealing With Vomitoxin Needs A Two Step Strategy: Vomitoxin, in its unaltered state, cannot be bound by any mycotoxin binder.  Vomitoxin needs to be reconfigured (opened up to expose attachment sites) in order for mycotoxin binders to effectively bind up vomitoxin. That is why Crystal Creek® offers a strategy for dealing with vomitoxin, using either Crystal Creek® Mycotex or UltraSorb R in conjunction with Fuse 207 (see Figure 1).

Crystal Creek® UltraSorb R: Provides a specific blend of enzymes designed to reconfigure the vomitoxin molecule so that the Fuse 207™ can properly bind with the vomitoxin. Crystal Creek® UltraSorb R is designed specifically for use in ruminant animals and is allowed for organic use. There is an UltraSorb P and an UltraSorb S available that are designed specifically to function in the unique digestive conditions of poultry and swine respectively when dealing with vomitoxin in these species.

Length Of Exposure To Mycotoxins Can Impact Strategy And Response

It is important to understand that the longer animals have been exposed to mycotoxins without the benefit of an effective mycotoxin binder in the ration, the more potential there is for damage to vital organs such as the digestive tract, kidneys, liver and immune system. If a new feedstuff is introduced to the ration, the cows drop significantly in production due to mycotoxins, and the animals are fed an effective mycotoxin binder within a couple of days, the animals many times will recover much of the lost production in a short time. However, if the animals are exposed to the mycotoxins for a longer period of time (two weeks or more) then the risk of organ damage is higher and the recovery will be slower relative to the length of time the animals have been exposed to mycotoxins.

It is also important to note that when vital organs are overexposed to mycotoxins, production may not return to normal even when an effective mycotoxin binder is put into the ration. It is possible to have some indicators, such as DMI, return to normal and still have production lag.  At that point, the cows need to remain on the mycotoxin binding strategy. A short-term ration adjustment of 3 to 7 days for the whole herd (or especially for cows under  150 days in milk) may be required to kick-start a production recovery. In these situations it is recommended that you call your Crystal Creek® nutritionist and discuss which short-term ration strategy options would be best for your herd.

Feedstuffs containing mycotoxins are a fact of life that should not be ignored. They can be managed effectively with a proper strategy.  Crystal Creek® partners with some of the most innovative companies in the mycotoxin binder industry and is able to take advantage of their technical expertise to bring advanced, effective products to our clients. Take advantage of the technical innovations and experience that Crystal Creek® offers to protect your bottom-line. 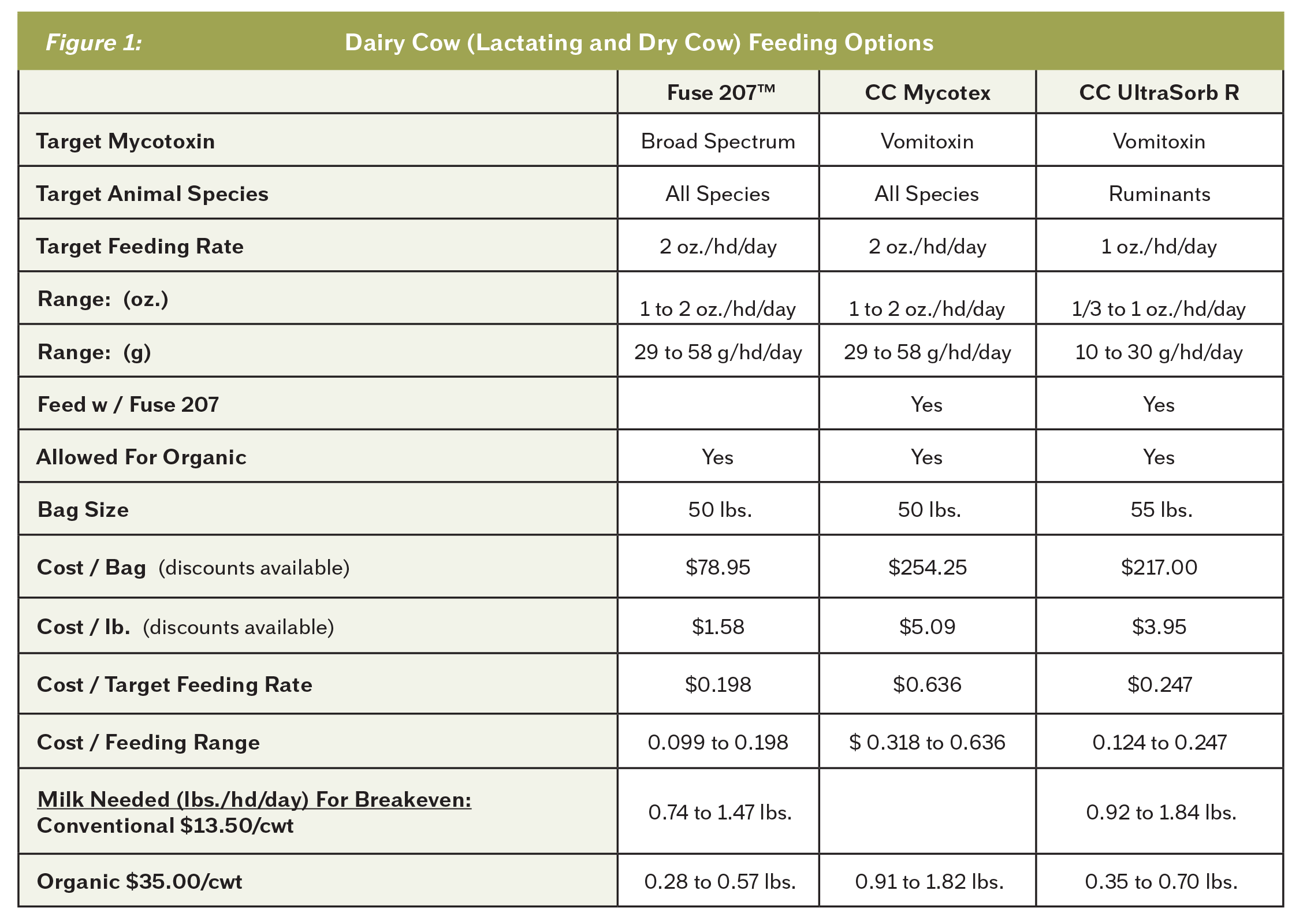